I'm getting over a really nasty head cold, so much of my life right now appears to be swaying from port to starboard.

But this is an interesting piece of news:

How Evil Are You?
Posted by tommyspoon at 7:07 AM 2 comments:

... I met a man with seven wives.
Every wife had seven sacks,
Every sack had seven cats,
Every cat had seven kittens.
Kittens, cats, sacks, wives,
How many were going to St. Ives?

"Scar Tissue" by the Red Hot Chili Peppers. Most of the RHCP lyrics are utter nonsense and thus should be ignored. But I can't get the following line out of my head these days: "I'll make it to the Moon if I have to crawl." The interplay between Flea and John Frusciante is simply beautiful.

"American Car" by Mike Doughty. I love Soul Coughing. I love Mike Doughty's solo work even more. His lyrics are some of the best poetry I've heard in a very long time. This track from his recent album "Haughty Melodic" is one of the best.

"Jesus of Suburbia" by Green Day. Good to know that punk isn't dead. And just to underscore that point, I saw a gaggle of kids outside my neighborhood high school wearing mohawks (each a different color), Misfits t-shirts, and Doc Martens.

"Back in Black" by AC/DC. One of the few things that get me going these days. Nothing like a main line shot of angry guitars!

"Sour Girl" by Stone Temple Pilots. My current ear worm. I seem to hear this melody everywhere I go...

"The Mark Has Been Made" by Nine Inch Nails. This is the music playing on the teaser ad for the upcoming season of HBO's "The Sopranos". It's one of my favorites from Mr. Reznor and company. Ever since Katrina, I've had a little NIN in my mental airplay since he's usually not mentioned in the conversation about New Orleans music. Even though you'd never put him on the bill of a zydeco show, I always hear a bit of the spirit of the Crescent City in his music. Yes, this is a dirge. But it's a dirge with a message: Do something!

"Into the Mystic" by Van Morrison. Just because.
Posted by tommyspoon at 10:02 AM No comments:

Yesterday, Sweetie and I traipsed down to the Mall and entered the Hirshorn Museum. There we saw an exhibition of the work of photographer Hiroshi Sugimoto. Wicked awesome!, as the Southies might say. If you are local or plan on being in the Washington area between now and May 14, I strongly urge you to go see this exhibit. I really loved his photographs of the wax figures of Henry VIII and his six wives.

It's been a while since a gallery exhibit has really excited me. And I didn't even mention that this opened on Sunday. Yippee!
Posted by tommyspoon at 8:53 AM No comments:

I usually don't go for these online personality things, but I think Johari Windows are cool. A friend at Kenyon did one of these things on me for some pysch project and it was very interesting. Anyway, I invite you to participate in mine.

Just pick five or six words that you think best describe me. Feel free to remain anonymous.
Posted by tommyspoon at 8:11 AM 1 comment: 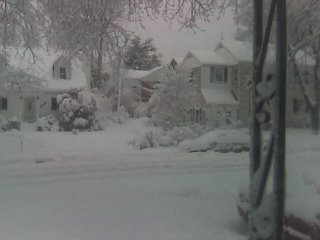 Well, Winter finally decided to show up this weekend. The official snowfall total for our neck of the woods was 8", but I think we got closer to a foot. It appeared on Sunday morning having done absolutely nothing all day Saturday. After digging ourselves out and a nap, Sweetie wanted to take some pictures. A good time was had by all! 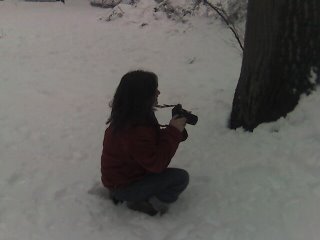 A nice review of the show courtesy of the WaPo.
Posted by tommyspoon at 1:16 PM No comments:

This is one of the reasons I absolutely love living here in our Nation's Capital:

"Oh, no," said a woman with a Minuteman sticker on her coat. "Not the Nazis."

Because nothing spoils an anti-immigrant rally faster than a bunch of actual Nazis showing up.

oh i could give a straight-up goddamn

Things that the rest of the world is hewing and crying about that I could not give a fig about:

Tom/Tom Go to the Symphony

As a Kennedy Center Volunteer, Dad scored some free tickets to the world premiere of Roberto Sierra's "Missa Latina" performed by the National Symphony Orchestra, the Choral Arts Society of Washington, and two soloists. I had not been to a symphony performance in quite some time, and this was a wonderful evening to ease back into the orchestral milieu. Yes, it was a traditional orchestral mass. But it was peppered throughout with timbales, maracas, and bongos. The "Kyrie" was set to a rhumba beat! My favorite line from the review: "Indeed, the 'Sanctus' could almost be turned into a pop song."

As enjoyable as the performance was, it was even nicer to see Dad out and about. He bumped into the woman who trained him as a Volunteer, who was overjoyed to see him. For a while, it was as if all the events of last year hadn't taken place. Aleluia!
Posted by tommyspoon at 8:36 AM 4 comments:

I wrapped up a bit of stage combat work with The Arlington Players' production of "Noises Off" last night. I was brought in to help choreograph a fall down a split flight of stairs, a tumble over the back of a couch, and assorted other bits of melee. Now I myself have choreographed my own fall down a similar flight of stairs several years ago, but I had never taught this to anyone else. I consulted with several stage combat folks I know and they all said that this was a very dangerous stunt to pull off well. But I lucked out big time with the actor who has to execute the fall. He's very active in Tae Kwon Do so he really knows how to use his body. So all we had to do was map out a few logistics and break the fall up into several parts: 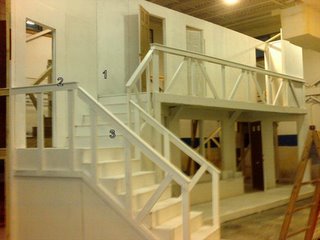 Sounds complicated, but the whole thing takes about 8 seconds to execute.

But as I watched the latter half of the show, I realized that there was so much more I could have done to help the production. I'm not suggesting that I have the "magic touch" or anything, but there were several moments where the slapstick business looked, well, amateurish. I could have helped polish that stuff up a bit. Ah well. There's always another show!
Posted by tommyspoon at 8:51 AM 1 comment: