While on the subject...

Ms. Lohan's recent antics have sparked a few thoughts from yours truly. Having just spent several days under lights and camera I understand that making movies is not all peaches and cream. (I much prefer the theatrical process to the cinematic one, but no matter.) And I can only imagine what it must be like to be hung over (or "dehydrated") while on set. But if the demands of being a highly paid film actor are too demanding, then please step aside and open up some opportunities for other actors to fill your "exhausted" shoes. There are several young women that were extras for "Bride and Doom" that would be more than happy to swap places with you, Ms. Lohan. And I can almost guarantee that they will show up for work, on time, sober, and prepared.
Posted by tommyspoon at 9:17 AM 3 comments:

Spent the weekend in a funeral home shooting the final scenes of "Bride and Doom." That's me looking ever so creepy and somber in the chapel. 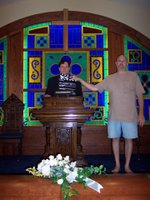 The work went very well; I even cracked up the cameraman during my sermon. These people have been much fun to work with, and that made my eerie discovery easier to handle.

We shared the building with two "clients", each tucked away in their own viewing room. One was a woman in her 80's who seemed perfectly at home in her satin-lined eternal bed. The other was a young man killed in Iraq. 22 or 23 years old, I think. I stumbled into his room purely by accident wile searching for a quiet place to warm up. (I don't think he would have minded a bit if I conducted my usual physical and vocal routines, but I was sufficiently spooked that I excused myself. Yes, I said "Excuse me" to a corpse. Guess my manners are lodged firmly in place.)

As the day wore on, I couldn't get his cherubic face out of my mind. I've been to funerals of young people, but there's always something disturbing about seeing such a young person lying in a casket. The mortician's touch on a young person seems to beatify them in a way that has always creeped me to the bone. And the more I thought about this poor young man and his family, the more it got under my skin. I warned several people not to go into that room, so they would be spared the awful sight.

I shared my feelings with one of the cast and she told me how one of her relatives was injured in some military training and would not be returning for his third tour. She said he is feeling despondent because he is looking forward to a career in law enforcement and this back injury might prevent him from realizing that dream. I told her about my experience at the ATF and said that there are more ways to catch bad guys than jumping out of squad cars and kicking down doors. She said that she was happy that her relative had been injured so that he has been spared that third tour of duty. "Looking at the poor young man in there," she gestured to the viewing room, "really brings it home, doesn't it?" "It makes me really angry," I responded. "Angry and sad. There's no good reason for him to be lying in there." She nodded sadly.

And then we were called for our next scene. Art, like life and war, always goes on.
Posted by tommyspoon at 7:29 AM 1 comment: