It's been a while. A really long while. Needless to say, lots has been going on. Mostly good, but some not so good. I'll get to all that later.

I'm trying to resurrect my writing, so I'm taking part in The Weekend Assignment. It's a contest of sorts that was started by John Scalzi when he was working at AOL. It's a chance to flex your creativity in a short format. So we'll see how this goes. Click the picture to find out more: 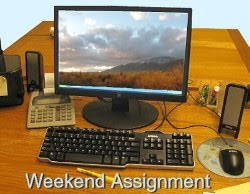 2010 has already brought many changes to my life. My Father passed away in January as a result of a fall. It was quite unexpected and shocking and tragic and sad and all those other things. But my Sister and I are getting through it, one day at a time. Washington experienced the snowiest February in recorded history, which cut the number of performances of "Amadeus" almost in half. I played the title role, but that's for another post.

I'll sign off for now, but there are many more posts to come. Thanks for sticking around!
Posted by tommyspoon at 2:15 PM

Labels: Dad, Theater, Too Much Time on My Hands, Writing